Tachinid flies and the final frontier…

Forest canopies are often referred to as one of the “final frontiers” of biodiversity exploration. We know astonishingly little about what organisms and ecological interactions occur in forest canopies, primarily due to the difficulty in sampling and studying them. In recent years there have been many initiatives to begin exploring the flora and fauna of forest canopies, particularly in the tropics. These efforts have revealed diverse communities inhabiting the upper reaches of tree canopies, often quite distinct from those occurring near ground-level in the same areas.

In a recently published study in the journal Insect Conservation and Diversity led by Pierfilippo Cerretti (Univ. Roma), we analyzed the diversity and composition of tachinid flies in the canopy and understory of a temperate forest in Italy (Bosco Fontana, right). Using 14 Malaise traps (7 suspended), we found that the canopy hosted a distinct community of tachinid flies. 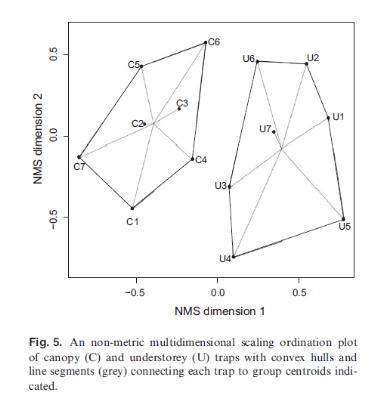 Overall, more tachinids (were collected from understory traps (36) than from canopy traps (28), but the canopy traps had higher evenness and high diversity values. A number of species occurred solely or primarily in just one of the habitats and many of those that occurred in both habitats showed strong sex biases in one habitat or the other. This is one of the very few studies that have ever examined a canopy parasitoid communities, and the only rigorous quantitative study examining vertical stratification of forest tachinids. We hope to pursue more such studies of tachinid and other insect communities in this “last” frontier.

This entry was posted in Scientific publications and tagged canopy, forest insects, Tachinidae. Bookmark the permalink.