Research in the Stireman lab is focused on the evolution and ecology of insects. Of particular interest are the ecological organization of insect communities and their distribution, the processes of population differentiation and adaptive radiation, the evolution and ecological consequences of species interactions (especially tritrophic interactions), phylogenetic systematics of parasitoid insects, and the behavioral ecology of parasitoids. I am particularly fascinated by parasitoids and their ecological and evolutionary interactions with hosts. One such group that I have spent a number of years studying is the Tachinidae, a very diverse (~10,000 described species), abundant, and little known family of parasitoid flies that attack insects and other arthropods. Plant-insect interactions, primarily dealing with caterpillars and Cecidomyiid gall midges, are another major area of interest that people in my lab have been pursuing with a number of collaborators (see below). Some of the main areas of research in the lab are described in more detail below.

Phylogeny and Evolution of World Tachinidae

Recently we have embarked on an ambitious project to understand the phylogeny and evolution of the fly family Tachinidae. This is an NSF funded project in collaboration with Jim O’Hara (Canadian National Collection), J. Kevin Moulton (U. Tennessee), and Pierfilippo Cerretti (U. Roma), and many other colleagues around the world. This project involves molecular and morphological phylogenetic analysis, comparative analyses of host use and oviposition strategies, development of interactive keys and web resources, and systematic revisionary work.

Speciation and coevolution between plants, herbivorous insects, and parasitoids

Understanding how ecological interactions influence the divergence of populations and lead to adaptive radiation is a major interest in the Stireman lab. Recent and current work in collaboration with Patrick Abbot (Vanderbilt University) and the Cipollini lab at Wright State involves analyzing adaptive radiation of Asteromyia gall midges (Cecidomyiidae) across their goldenrod hosts (Solidago sp.). Although, taxonomically described as a single species, genetic data indicates that populations of these gall midges are undergoing an extensive adaptive radiation onto different Solidagospecies. This diversification appears 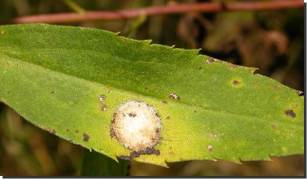 to be strongly influenced by a symbiotic fungus necessary for gall formation as well as a diverse suite of parasitoid wasp enemies that select for divergence in gall shape and perhaps host associations. It is a fascinating model system for understanding how hosts, enemies, and symbionts interact to shape evolutionary paths and facilitate diversfication. We are studying this system from a variety of angles and approaches from phylogenetics and population genetics to community ecology to chemical ecology.

Recently, under the impetus of PhD student Jeremy Heath, we have begun to examine the interactions between the Asteromyia midges, host plants, symbionts and enemies at a fine, mechanistic scale. We are exploring how the midges control fungal growth and how they interact with plant chemical defenses. This has led to an interest in carotenoid molecules and their role in plant-insect interactions.

In addition to understanding how diversity develops over evolutionary time, we are also interested in how and why it is distributed as it is, how it is organized into communities (e.g., food webs), and how components of these communities interact in a multitrophic

framework. To get at these questions as well as to document and describe biodiversity, the Stireman lab is involved in long-term large-scale parasitoid-caterpillar-plant rearing studies, primarily in Ecuador (at the Yanayacu Biology Station) but also in Arizona, Lousiana, Costa Rica, Nevada, and here in Ohio. Much of this work is led by Lee Dyer (U. Nevada, Reno) and involves a large number of collaborating scientists including both ecologists and taxonomists. See the following links to see some of the organisms involved.